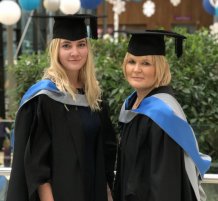 Martha Abley-Mallett and her daughter, Israel Gayton, celebrate graduating together from the same university – for the second time

Mother and daughter both graduate together - for the second time

A mother and daughter are celebrating graduating together from the same university – for the second time.

Martha Abley-Mallett, 43, and Israel Gayton, 22, both collected degrees from the University of Exeter last year. Now the pair have both been awarded a further degree from the same institution and graduated together again.

Mrs Abley-Mallet, a mother of five, was home schooled as a child after the age of 11, but as her own children grew up she became keen to experience higher education too. After completing an access course she completed her psychology degree at the University of Exeter in 2017, studying at the same time as Miss Gayton completed her English undergraduate course.

Both went on to complete teacher training and were awarded a PGCE at the University of Exeter’s winter graduation last weekend.

As was the case when they were completing their first degrees, Mrs Abley-Mallett and Miss Gayton supported each other through their studies. But while Miss Gayton has had the usual student experience, Mrs Abley-Mallett has fitted studying around looking after her four other children, who are aged between 21 and 11.

Mrs Abley-Mallett completed her PGCE through Exeter College and the University of Exeter, working and studying at the same time, and is now teaching psychology at Exeter College. Miss Gayton studied for a PGCE in English and now works at Uffculme School in Devon.

Mrs Abley-Mallett, who lives in the outskirts of Exeter with husband Steve, said: “It’s been lovely for us to be able to support each other again, we were able to share experiences as we studied. It’s again been a challenge for both of us and being different ages we were able to share different advice with each other. But I’m very aware that this is Israel’s moment too, when you are young and at university for the first time you want your own experience so I’ve been careful to not intrude on that.

“It’s now so wonderful that we both have jobs in fantastic institutions in Devon – which we are both really enjoying. It is a real privilege to be a teacher and it’s great that we could both train in the way which suited us – our courses were different.”

Mrs Abley-Mallett and Miss Gayton celebrated with a family party after their degree ceremony on Saturday.