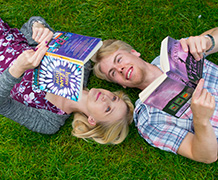 Leap into the imagination with Exeter's festival of writing for children

A stellar line up of top children’s authors will be sharing their expertise at Exeter’s festival of writing for and by young people during the October half term from 25 October to 1 November.

The exetreme imagination festival includes the likes of Michael Morpurgo, who will be giving a talk at Exeter Northcott Theatre, following a performance of An Elephant in the Garden, the new adaptation of his best-selling children’s novel set during the Second World War.  Master of horror, Darren Shan will set the scene for Halloween at the Northcott, and Francesca Simon and Simon Butler will run a contest to see whether Dennis the Menace or Horrid Henry is King of the Bad Boys.

There is also the opportunity to see Andy Stanton award-winning author of the Mr Gum series, and Babette Cole, author of over 70 books, including Princess Smartypants, Mommy Laid an Egg and Bad Habits who will be talking about how she creates her characters, as well as reading stories and anecdotes.

In addition to the author events, there are exhibitions, performances and creative workshops as well as a family fun day.  On Wednesday 29 October there will be a particular focus on teens, with the exetreme teen day where Exeter Library will host a number of events including a drama workshop exploring young adult literature. There will be a Q&A session with hugely successful young adult author and 2nd Year University of Exeter Physics student Beth Reekles, the festival’s Youth Curator.

As part of the exetreme imagination festival 2014, the Graduate School of Education ran a poetry competition for children and young people, using the theme of conflict. The topic was chosen in this anniversary year of the beginning of World War One where conflict is symbolised through the poppy to reflect loss caused through fighting. The conflict theme looks beyond war, by opening it out to environmental conflict between man and nature, or conflict in relationships with other people. PGCE English students judged the poetry competition together with Professor of English, Connie Ruzich, a Fulbright Scholar from USA based at the University of Exeter, researching the poetry of WW1 and British centenary commemorations of The Great War to develop teaching resources for American schools.

Connie Ruzich explained that judging the many entries from the young people was a difficult task for the panel.  She said:"There were dozens of high quality entries in each group, and the poems submitted were remarkable in their imagery and their memorable uses of language that provide fresh perspectives on World War I and the theme of conflict."

The theme of conflict runs through the festival, with some events linked to the First World War. Tom Palmer’s latest book, Over the Line is about one footballer’s experience of the First World War. During an event at Exeter library, Tom will be playing his popular Football Reading Game with a group of young people.

Festival curator and Devon-based author, Mal Peet said:“exetreme imaginationis a city-wide, multi-media, interactive festival for children of all ages. The festival aims to inspire young people to let their imaginations go wild, with fantastic opportunities to watch and participate in performances, visit exhibitions and take part in workshops about writing and illustrating.”

As part of the festival, there will be a day of activities especially for families. The exetreme family fun day takes place on Saturday 1 November with author events, live story making, creative workshops and other shows and activities taking place across the city.

Further details and booking information are available at the website.