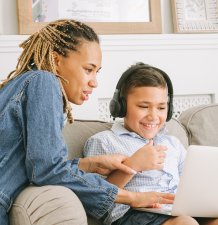 Own-Voice Intensive Phonics (OVIP) approach is a computer-assisted instruction system which has already been shown to be effective as part of face-to-face tuition as part of previous research.

The first evaluation study of the online use of OVIP for children with reading difficulties – tested during the coronavirus pandemic – shows those who used it then made a 3.2-year mean word reading age gain over a 19 to 22-week period.

Questionnaire data from pupils and parents from the end of OVIP session and parent-reported data at a one-year follow-up demonstrated an overall increase in pupil reading skills and self-confidence that transferred into wider confidence and engagement for some pupils.

The research, by Eleni Dimitrellou, Philip Macmillan and Brahm Norwich from the University of Exeter, is published in the journal Jorsen. Dr Macmillan and Professor Norwich developed OVIP.

The OVIP method involves pupils reading the text of the lesson out loud in response to the teacher or teaching assistant's prompts, and the pupil's speech is audio-recorded until it is read without error. The pupil then listens to the audio recording of his/her own voice, reading the text, writing the words heard and creating an error-free written record of the lesson with support and checking by the teacher/ TA. The pupil later repeats the second step independently, ideally three additional times, writing the lesson in response to the audio recording, then checking the accuracy of the new written lesson against the original written record.

During the pandemic fifteen pupils participated in sessions online: nine boys and six girls aged between 7 and 12. Eight had been diagnosed with dyslexia.

All pupils who responded to a survey (8 out of 8) agreed that OVIP had helped them with their reading and seven said they enjoyed the OVIP programme.

Some parents (5 of 9) reported that their child's reading and writing had significantly improved since their participation in OVIP. Four had noticed a positive change in how their child takes on challenges and learns from them.

About half of the parents (4 out of 9) expressed that OVIP increased their child's motivation to improve their reading abilities and helped them shape positive attitudes towards reading for pleasure and, thus, achieve a life skill.

One parent said: “OVIP has made a significant improvement to our son's reading and improved not only his confidence in reading but consequently his overall confidence & restored a belief in his own ability to achieve. He finished his term at school, winning the most awards in the whole school!”.