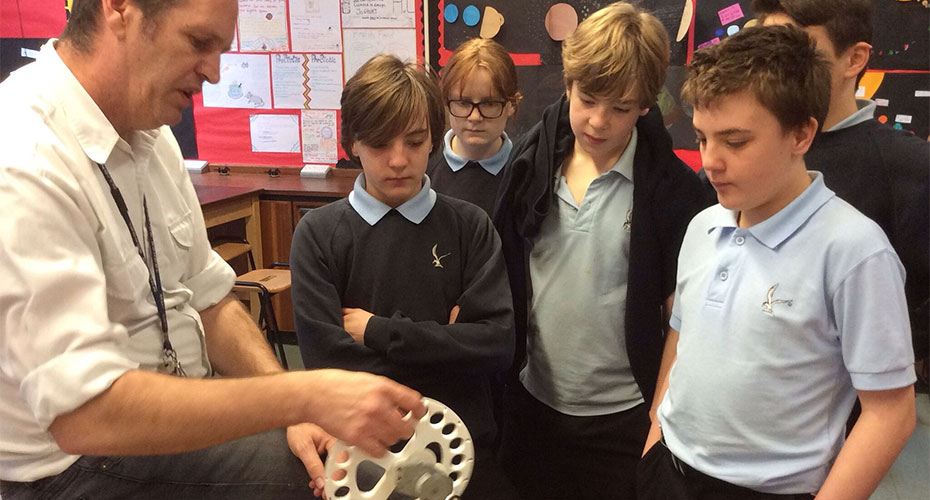 In this section we share the story of one of the activities that took place within the EPEE project, some of which are still going strong now. We hope this and our other case studies may provide inspiration for types of projects that can take place.

Mullion EcoSoc is an Ecology club at Mullion Secondary School, Cornwall. It runs at lunchtime and after occasionally after school. A group of 15-20 pupils of a mix of ages regularly turn up on a voluntary basis to learn about a wide range of topics. Each session lasts for 45 minutes, researchers from the University of Exeter come to the club and talk about their scientific research, including getting the pupils to do activities. and the lead teacher stays to support the delivery of the session.

Content varies, from the albatross project in Brazil, to turtle conservation in the Mediterranean, through to parrots in London and the development of intelligence in birds amongst many others.

One session lead by a researcher aimed to get the pupils excited about investigation, through conveying the idea that science is all about detective work.

“I brought some bird wings along, and the young people are all trying to identify the birds that these wings come from. The aim is not just look at pictures and match them up to birds, but to try and think about how this bird lived, how it would have moved, whether it's a large bird, small bird, whether it's hovering or has to fly through the trees, and try to use the information that they've got and piece it together to try and get the big picture.”

Sometimes, the suggestions for sessions comes from pupil’s themselves, for example they express an interest in a particular research area, or career and the teacher contacts the university link who finds someone who is working in this field. That person will come and talk about their area. So a pupil who was interested in being a marine biologist was able to attend a session led by a researcher working with marine turtles.

The talks given by researchers at Ecosoc help to open the pupils’ eyes to the research being done at Exeter University and are helping to change their perceptions of what scientists look like and do. The researchers that deliver these talks come from a variety of backgrounds and this has helped the students to see a career in science as a more attainable goal.

Since the topics are often not directly linked to the curriculum, this club provides an invaluable outlet for the students to gain and develop interests in subjects that enhance those covered in lessons:

Mullion EcoSoc started in January 2014 and has now developed a strong reputation amongst young research scientists at Exeter University. This is because members of EcoSoc ask such unexpected but searching questions, they often give the researchers new ideas! A key factor influencing early career researchers interest in Mullion School’s Ecosoc in particular is the well-established nature of the group and the supportive atmosphere, which allows them to feel comfortable testing new resources. It also allowed researchers to develop and trial new sessions and learning activities, which they will hopefully be able to take further to more schools around Cornwall and beyond. The teachers we have worked with have been extremely useful in providing feedback to our researchers to help make their resources as effective as possible.

Researchers are always very interested in the activities offered as part of the project and we are always able to find people to deliver content and even have a waiting list for sessions at Mullion’s Ecosoc.

“The lovely thing is you can do stuff beyond the syllabus, which is just brilliant. You can get the kids to come in and do things that they're not supposed to be learning to pass exams, they're doing it because it's fun, and they realise that science is exciting. It's a fantastic tool to have because it makes science real, rather than just learning for exams. It's people doing science and finding out about science.”

The following video provides an introduction to the EPEE project and an illustration of the Eco Soc project in action, including interviews with some of the young people involved.

You will find a wealth of case studies on the National Coordinating Centre for Public Engagement’s website. Including a wide range of projects and one-off events such as A-level Masterclasses, Science clubs, Archaeology digs and Summer Schools.